Anyone who studies the colorful history of jazz knows that many of the most legendary musicians were no strangers to marijuana.  But do which know which Jazz Musicians who used weed?

Jazz music began in New Orleans at the turn of the 20th century, before spreading across the United States, being concentrated in the big cities.  Jazz music first found its voice in the largely black neighborhoods of cities like New York, Chicago and Baltimore, and clubs began popping up throughout the 1920s and 30s where jazz musicians could mingle with each other, play together for eager audiences, and record legendary records that still compel us today.

It may be hard to believe this now, but when jazz first hit its stride in the early 1920s, it was seen by many as an abomination of music.  The syncopated rhythms, freeform instrumentation and innuendo-filled lyrics were outstandingly rebellious, and many conservatives were concerned about what jazz would do to society, afraid of its influence on younger people. 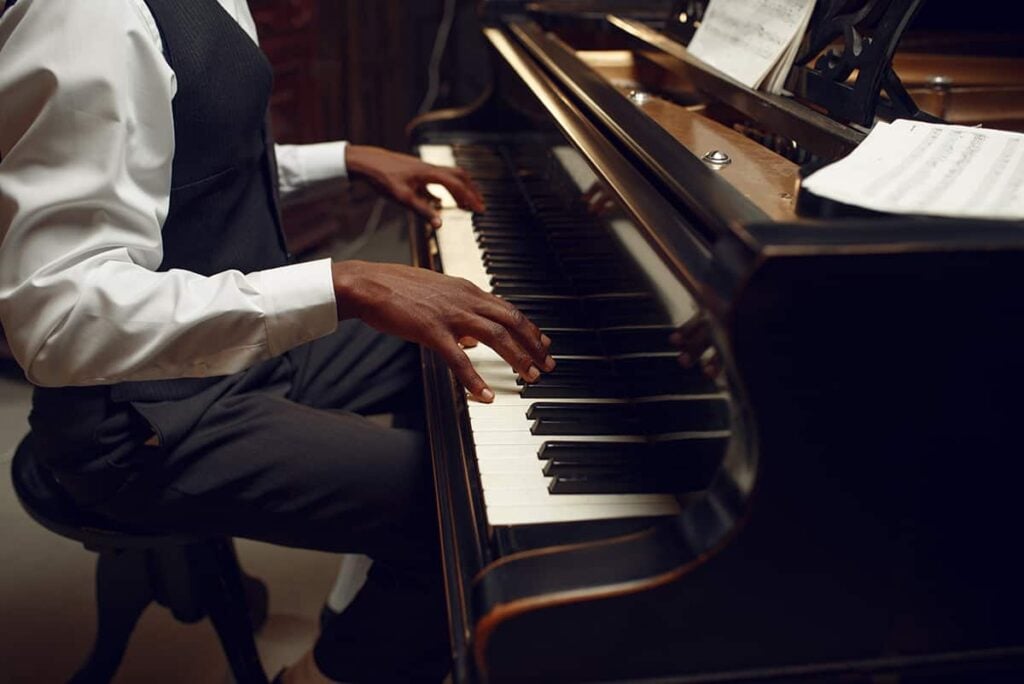 The Jazz Musicians Who Made It Possible, Thanks to a Bit of “Creative” Help

As jazz was such a far cry from the heavily structured classical music that came before it, you can imagine that many of its visionaries were highly creative people.  In fact, many of jazz music’s legends found that weed helped that creativity, allowing them to think outside the box so that they could create and perform pieces of music that helped jazz further define itself as a completely one-of-a-kind style for the decades to come.

This is why you have got to check out these iconic jazz legends who were known to be regular marijuana users.  We will cover their stories while explaining the role that weed played in their prolific careers.

Born in 1917, Dizzy Gillespie was a trumpet virtuoso whose improvisational skills allowed him to stand out from other trumpeters of his day.  He was renowned for being highly creative and went on to be a successful bandleader thanks to his understanding of complex rhythms and harmony.  He played a crucial role in the development of the subgenre bebop which became prominent in the 1940s and had a direct influence on the careers of Miles Davis, Fats Navarro, and others.

Gillespie got his big break when he joined Cab Calloway’s band in 1939, but in only a couple of years, he was fired after a physical altercation with the bandleader.  Still, this brief stint helped launch his successful career in music, and along with fellow musician and friend Charlie Parker, Gillespie brought bebop to the masses.

Gillespie first came to New York in 1937 as a rather straightlaced man who didn’t touch alcohol.  But it did not take long until he found marijuana, which was widely used by jazz musicians at the time.  Gillespie was known to smoke with fellow legend Louis Armstrong in his home, and spoke about weed in interviews, citing its influence on his music.

You would have a hard time finding a contemporary jazz musician who has not been influenced by Chet Baker, nicknamed the “prince of cool” thanks to his contributions to the subgenre of cool jazz.  Baker, who died in 1988, was a trumpeter as well as a vocalist, whose contributions to jazz have a lot to do with where the genre is today.  Baker was born in 1929, and the peak of his career took place during the 1950s, after joining the Gerry Mulligan Quartet.  He became so successful in such a short period of time that he was even offered a stint in Hollywood in the 50s, which he had a decent amount of success with.

Baker, as his fans know, had a history with drug abuse that led to a decline in his career.  He also had some troubles with the law that added to his struggles.  He did have a successful comeback in the 70s and 80s, during which time he recorded music prolifically and restored his reputation.

Throughout Baker’s career, he was an avid and open marijuana user.  According to Baker in an interview, his father smoked marijuana when he was a child, and he began smoking it early in his life.  Many believe that the mind-expanding properties of weed helped him with his musicianship, allowing him to think outside the box and develop a style completely unique to him.

Anyone who has read a Louis Armstrong biography knows that the legend happened to be a daily cannabis user, and an outspoken one at that.  In fact, Armstrong was known to be generous with his weed, inviting other jazz players over to his home to smoke and play cards.  Armstrong was born in 1900 and had a turbulent childhood that led to a stint in juvenile detention for shooting a gun on New Year’s Eve in a celebratory fashion.  During his time away, he met Professor Peter Davis who introduced him to the cornet, and one of the first jazz legends was born.

Armstrong was not just a cornetist, but a unique vocalist who established a style of his own.  His legend lives on in his outstanding catalog of recordings, and his undeniable influence on the trajectory of jazz music in the United States and around the world.

Armstrong first tried cannabis in the 1920s, and a lifelong love affair was born.  He was arrested for possession in 1930 but was soon released because the detectives who arrested him happened to be big fans of the star.  At the end of his life, he advocated for legalization, claiming that marijuana kept him off of hard drugs and allowed him to maintain a successful career by boosting his creativity and keeping his spirits high.

Billie Holiday is still known for having one of the best voices of all time, and her work as a vocalist throughout her 26-year-long career is one of the most prolific in jazz history.  Holiday was a complex character who dealt with enormous personal struggles when she was not on the stage or in the recording studio and has been a favorite subject among biographers of the 20th and 21st centuries.

She was born in 1915 in Philadelphia, Pennsylvania and eventually moved to Harlem, New York to find work as a vocalist, during the Harlem Renaissance era when jazz clubs allowed musicians to have lucrative careers.  By the 1940s, she found mainstream success and was one of the most sought-after vocalists during the decade and the ones that would follow.

Billie was known for her love of marijuana, and there are plenty of stories of her smoking in closed-off sections of the clubs she performed at.  Holiday was known for her struggles with mental health and weed helped take the edge off so that she could relax and find inspiration for her music.

Holiday had a difficult childhood, and the pains of her early life eventually caught up to her, when she turned to harder substances that would eventually destroy her career and lead to her death caused by cirrhosis, indicative of her struggles with alcoholism.  Still, her legend will live on forever, as she had a once-in-a-lifetime talent.

Jazz pianist Thelonious Monk changed perceptions of jazz with his extremely innovative approach to playing piano, renowned for his use of dissonance and freeform rhythms which helped bring about a more avant-garde approach to the genre.  A true creative genius, Monk is still lauded as one of the most influential jazz musicians of all time.

Born in Rocky Mount, North Carolina in 1917, Thelonious soon moved to New York City where he developed a love for the piano.  He began lessons at the age of six years old and went on to become a church organist as a teenager.  In Harlem, he began participating in piano-playing competitions, which helped him become acquainted with leading jazz musicians of the era such as Duke Ellington and launched his career.

Monk was a big fan of weed, and he smoked it daily.  Monk struggled with his mental health throughout his life, and largely credited marijuana with helping him feel more stable.

From Bebop to Blue, These Weed Smoking Jazz Musicians Made It happen

Some of the biggest jazz legends were regular weed users, and one could argue that their marijuana use influenced their careers in a multitude of ways.  Of course, at the end of the day, they happened to be enormously talented people with natural gifts, who continue to inspire us in the 21st century.