Free Fast Discreet Shipping on ALL orders
Home/Articles/Cannabis 101/What are the Key Differences Between THC and THCV?

What are the Key Differences Between THC and THCV? 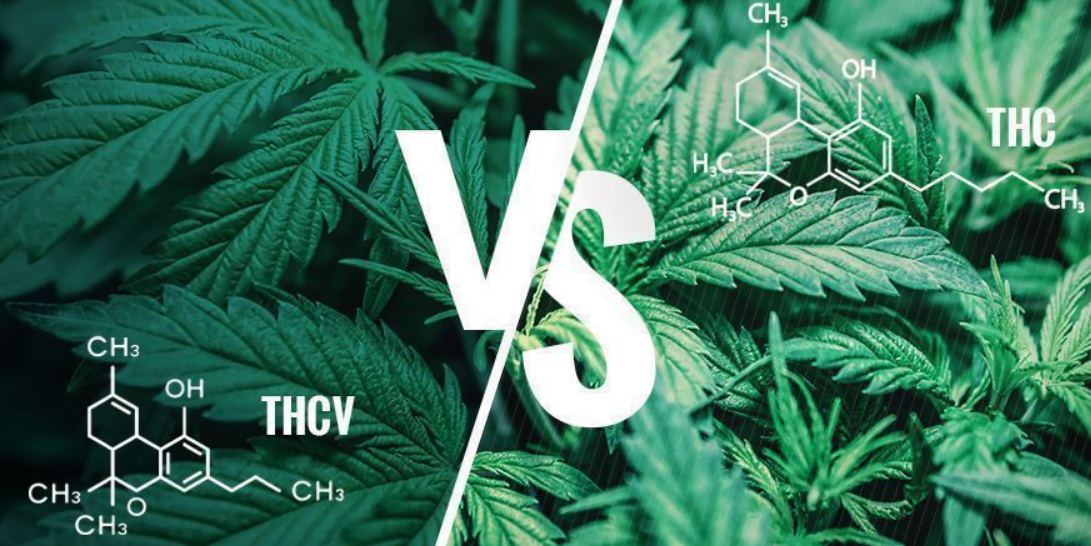 It’s a really exciting time to be a hemp enthusiast.  Research and technology are coming together like never before to introduce all kinds of fascinating hemp-derived products to the market.  All., while discoveries are being made about individual compounds in the plant that can be concentrated to provide distinctive desirable properties to the body.  One of the latest hemp cannabinoids to be having a moment is tetrahydrocannabivarin (THCV).  THCV is a compound that’s widely misunderstood as it’s simply very new to the hemp scene.  And, it goes without saying that most people will naturally assume that it behaves similarly to (delta 9) THC based on its name alone.

In fact, tetrahydrocannabinol (THC) and THCV are similar, but they have some major differences between one another that users should be aware of if they want to use it in various product forms.

THC and THCV: Homologues in Nature

THC and THCV sound so similar to one another for a reason: they’re homologues of one another.  This means they’re nearly molecularly identical with just minor changes in chemical structure.  They are related to one another genetically speaking, but ultimately, they behave differently in the body in terms of how they interact with the body’s endocannabinoid system.

Tetrahydrocannabinol and tetrahydrocannabivarin are two cannabinoids present in both marijuana and hemp. But, in hemp, they exist in lower levels.  The hemp plant has about 0.3% delta 9 THC in its chemical composition, and even lower levels of THCV. Thus, making them both minor cannabinoids.  Still, it’s easier to extract THC than THCV from the hemp plant, as it’s more naturally abundant. Also, because tetrahydrocannabivarin is even less occurrent in the plant, it’s simply not as understood.  Since, of course, it took a long time for scientists to even discover it.

Many people will assume that THCV is psychoactive. Why? Mainly due to the “THC” in its name.  We are used to cannabinoids with “THC” in their name creating a high, as is the case with not only delta 9, but delta-8, delta-10, and THC-O Acetate (THC-O).  However, the high associated with THCV is a lot more complicated than that of the other cannabinoids mentioned.

These other cannabinoids have psychoactive properties that work cumulatively. That is to say, these properties always occur, and are more powerful the higher your dose is.  THCV is different, however.  At low doses, it may not be psychoactive at all, which means that you need to be a lot more conscious of how many milligrams of THCV you consume if a high is what you’re after.

Another interesting fact about THCV’s psychoactive properties that they are reported to last for half as long as those of THC, regardless of the delivery method or how much you take.  So, don’t expect to feel high for a long time when taking THCV.

Because its chemical properties are unique, THCV’s boiling point is higher than that of tetrahydrocannabinol.

Why does this matter?  Well, the boiling point of a cannabinoid determines the temperature at which it must be decarboxylated. In return, this is to deliver its noted effects.  You won’t get the high of THC that you’re looking for unless the compound has been heated to at least 315 degrees. And, with tetrahydrocannabivarin, you need to go to an even higher temperature.

This information matters if you’re vaping a THCV e-liquid. Essentially, you must adjust your device’s output to allow it to reach this temperature.  Same goes for making edibles with a THCV extract or THCV flower product, which must be cooked at a higher temperature.

Federal law says that hemp products are legal as long as they contain a maximum of 0.3% delta 9 THC.  Still, there is no law that determines a legal limit of THCV.  Meaning, you can legally purchase THCV in any concentration being sold.  State laws are a bit more confusing, as it’s likely that the cannabinoid is presently banned in all states that have banned delta 8 THC.

Availability on the Market

Because of its legal status, you can find tetrahydrocannabivarin on the market, even in states in which delta 9 THC products are illegal.  THC is very new to the scene though, so it might be a few months before it’s as widely available as, say, delta 8.

A major difference between the two cannabinoids is that while delta 9 THC is associated with an increase in appetite (the munchies), THCV seems to have the opposite effect, suppressing appetite for the duration of its activation in the body.  Of course, this can be very desirable to those who find themselves all too tempted to consume snacks whenever they use cannabis.

The psychoactive properties of certain cannabinoids are ultimately different for everyone based on the configuration of their endocannabinoid system. Coupled, of course, with their tolerance level and other physiological factors like hormones and mood.  But, overall, most people say that delta 9 THC inhibits mental clarity, causing them to feel “out of it” and find difficulty in executing certain tasks.  Meanwhile, most people who have tried THCV say that it doesn’t seem to have a notable inhibitory effect on mental clarity or alertness, therefore allowing them to perform tasks while it’s active in the body.

THC and THCV are ultimately two different cannabinoids which therefore have specific properties assigned to each one.  One particular area of interest concerning THCV is its potential role in the body’s relationship with insulin, which seems to be something that sets it apart from delta 9.

As of now, there is a lot more research behind the properties of THC than THCV.  Once THCV becomes more widely known, we believe that more studies will come out on its effects in the near future.

Yes, it’s fair to compare THCV to THC. Ultimately, however, these two cannabinoids are completely unique compounds that behave in different ways.  Meanwhile, THCV is federally legal and is starting to find its way onto the shelves of hemp companies.  So, you can compare the effects of these two cannabinoids for yourself, as each type has something useful to offer.