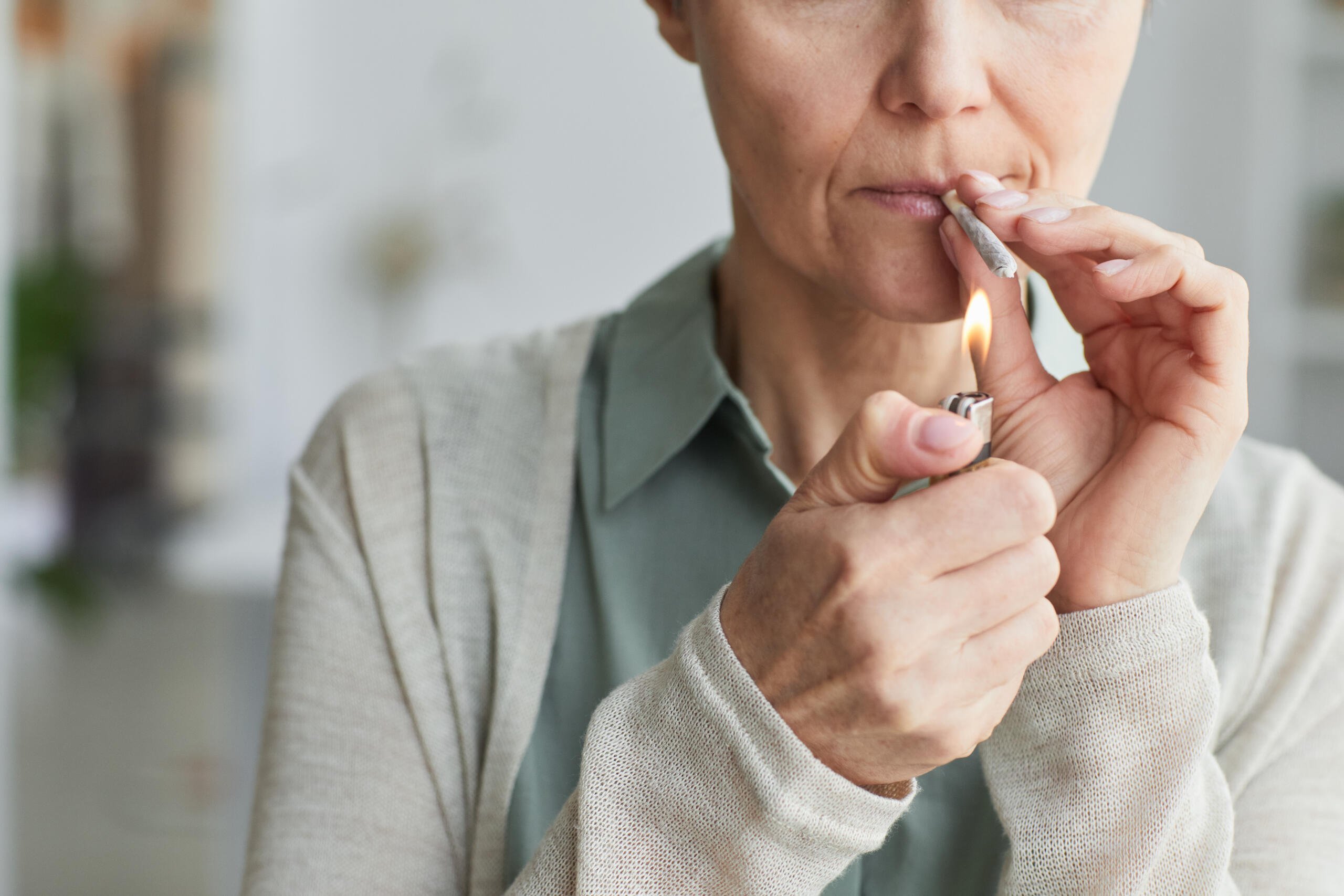 “Weed cured me from cancer.”

Many of us have heard people claim that they were cured from their cancer by using marijuana.

In this article we discuss whether marijuana can cure cancer – and where this concept comes from.

But CAN Marijuana Cure Cancer?

We have all heard if not directly, second hand that people have reported that their cancer was cured by cannabis. But can marijuana cure cancer? Just a quick search online and on forums and one can see that there are a not unsubstantial number of people who have had serious cancers who believe that the reason for their survival was the use of weed. You may have for example heard of Rick Simpson Oil – or RSO which was touted as the cure for Rick’s skin cancer.

Additionally we know that humans have used cannabis for millennia for recreational and medical uses and herbal remedies. The use for pain is well documented from as far as China to Victorian Britain. However as they did not have modern medical knowledge we do not know if cures occurred and more importantly and recently due to the illegal status oncologists and clinicians could not properly investigate the curative potential in the large clinical trials we need to give us definitive answers.

Due to the disastrous nature of cancer and the fact that globally 1 in 6 deaths are due to cancer. In the US the numbers are even more scary as many diseases that kill worldwide are less common here and medicine has also reduced deaths from cardiovascular causes (heart attacks and strokes etc). In the US over a lifetime over 39% of men and 37% of women will be diagnosed with cancer and it is currently the second highest cause of death in both sexes.

If you need help with any of the terms in this article in term so understanding  some of the medical and scientific terms used in this summary as related to cancer you can find definitions at the NCI Dictionary of Cancer Terms.

Before we go further we should also define what we mean by cancer. Essentially it is when a population of cells in the body become unregulated and start to multiply faster than the body can control the growth of those cells. These cells can then grow into large masses and/or metastasize to other parts of the body e.g. bones, brain or lungs and cause problems far from the origin of the cells.

There is not one kind of cancer. There are many types and historically we have defined cancers by where the cancer is believed to have begun, be it in the kidneys (e.g. renal cell) or the blood/bone marrow. For example a cancer that starts in the lungs may be called lung cancer – but even then there are different sub-types of cancer in the lung – for example small cell vs squamous cell etc. That same lung cancer may go to the liver – and it is still considered lung cancer as that is where the cells originated.

Cancer can then cause problems at the original site as well as to the new sites it has moved to.

Certainly one of the most appealing prospective applications for medical cannabis is treatment of the symptoms of cancer and chemotherapy. That however is different than actually curing the cancer and not only stopping it’s progression but also reversing it such that there is no level of detectable disease e.g. on CT, MRI or PET scans and/or based on other indicators or markers which are different for different forms of cancer.

It has actually long been prescribed to counter the negative effects of chemotherapy, but oncologists across the world are dealing with new trials to figure out whether cannabis can be used to reduce the burden of the cancer itself. This is accelerating as legalization takes hold and the Biden administration has made research in medical cannabis more prevalent.

Previous research study showed pledge for THC in cancer treatment, however some clinicians are skeptical of utilizing THC-based products because of its psychotropic effects (eg. the “high”). As a result numerous oncologists have rerouted their focus towards cannabidiol (CBD) and cannabigerol (CBG). A recent British research study, nevertheless suggests that cannabinoids may be most efficient versus cancer when integrated in a manner that permits them to act synergistically with one-another.

Dronabinol, a pharmaceutical form of THC, and a manufactured cannabinoid drug called nabilone are approved by the FDA for symptomatic treatment only.

Marijuana is the name offered to the dried buds and leaves of varieties of the Cannabis sativa plant, which can grow wild in warm and tropical environments throughout the world and be cultivated commercially. It passes lots of names, consisting of pot, lawn, cannabis, weed, hemp, hash, marihuana, ganja, and dozens of others. No matter how silly the name – the cannabinoids and their potential is real.

Researchers have identified lots of biologically active components in cannabis starting in the 20th century. These cannabinoids include the two best known and studied chemicals delta-9-tetrahydrocannabinol  (THC), and cannabidiol (CBD). Other cannabinoids are being studied.

At this time, the US Drug Enforcement Administration (DEA) lists cannabis and its cannabinoids as Schedule I controlled compounds. This indicates that they can not legally be prescribed, possess, or offer under federal law. Whole or unrefined marijuana (consisting of marijuana oil or hemp oil) is not approved by the US Food and Drug Administration (FDA) for any medical use. The usage of marijuana to treat some medical conditions is legal under state laws in lots of states.

What does the American Cancer Society say?

The official position of The American Cancer Society “supports the need for more scientific research on cannabinoids for cancer patients, and recognizes the need for better and more effective therapies that can overcome the often debilitating side effects of cancer and its treatment. The Society also believes that the classification of marijuana as a Schedule I controlled substance by the US Drug Enforcement Administration imposes numerous conditions on researchers and deters scientific study of cannabinoids. Federal officials should examine options consistent with federal law for enabling more scientific study on marijuana.”

Studies in other mammals and with rats in particular has show that the incidence of different liver cancers was reduced by increasing  doses of THC. Of note these decreases were not only dose related by also decreased the incidence of benign tumors (non-cancerous) in many organs. Another study showed that the administration of THC (Delta 9), , Delta 8 THC and CBN inhibited growth of a form of lung cancer both in test tube and animal models. In fact several studies have shown the inhibition of growth by cannabinoid in cancer cell cultures.

But what happens in rats and in test tubes with very specific kinds of cancer does not automatically translate into cannabinoids and cannabis being a cure for all forms of cancer.

There are other studies pointing to the ability of cannabinoids to cause anti-tumor effects by way of inhibiting the growth of blood vessels to the cancer and reducing their potential for metastasis. Others have shown the ability for cannabinoids to induce cell death (apoptosis) in cancer cells while potentially even improving the longevity of normal cells.

There are literally dozens and dozens of studies showing the mechanisms of for example CBD in being able to inhibit tumor growth and even the cellular level mechanisms of actions in different cancers. We are learning more about the potential of cannabinoids in reversing tumors at an increasing rate.

Unfortunately there is not good evidence in human trials pointing to the effectiveness of cannabis or the specific cannabinoids for cures or an improvement in lifespan by using cannabis.

Small pilot cases have been done with either inconclusive or no results.

Whether you’re looking for information for yourself or a loved one – it is important that you do your research and while we would love to be able to say that weed can cure cancer – it is not something we can justify currently. We can say that there is evidence pointing to the potentially curative properties of cannabis in certain forms of cancer and that further investigation and clinical trials are necessary.

As we rapidly increase our understanding of the underlying mechanisms of actions related to the over 100 cannabinoids identified at a molecular level – we can continue to hope that we will soon have better and more effective treatments for cancer than the difficult and side-effect regiments of chemotherapy.

In the meantime we suggest that you discuss your thoughts with your oncology health provider. Furthermore it’s important to remember that though it may not be curative – there are still uses for cannabis in the treatment of the symptoms associated with cancer and it’s treatment such as nausea, decreased appetite and anxiety amongst others.