Free Fast Discreet Shipping on ALL orders
Home/Medical Conditions/What are the Potential Benefits of THCV?

What are the Potential Benefits of THCV? 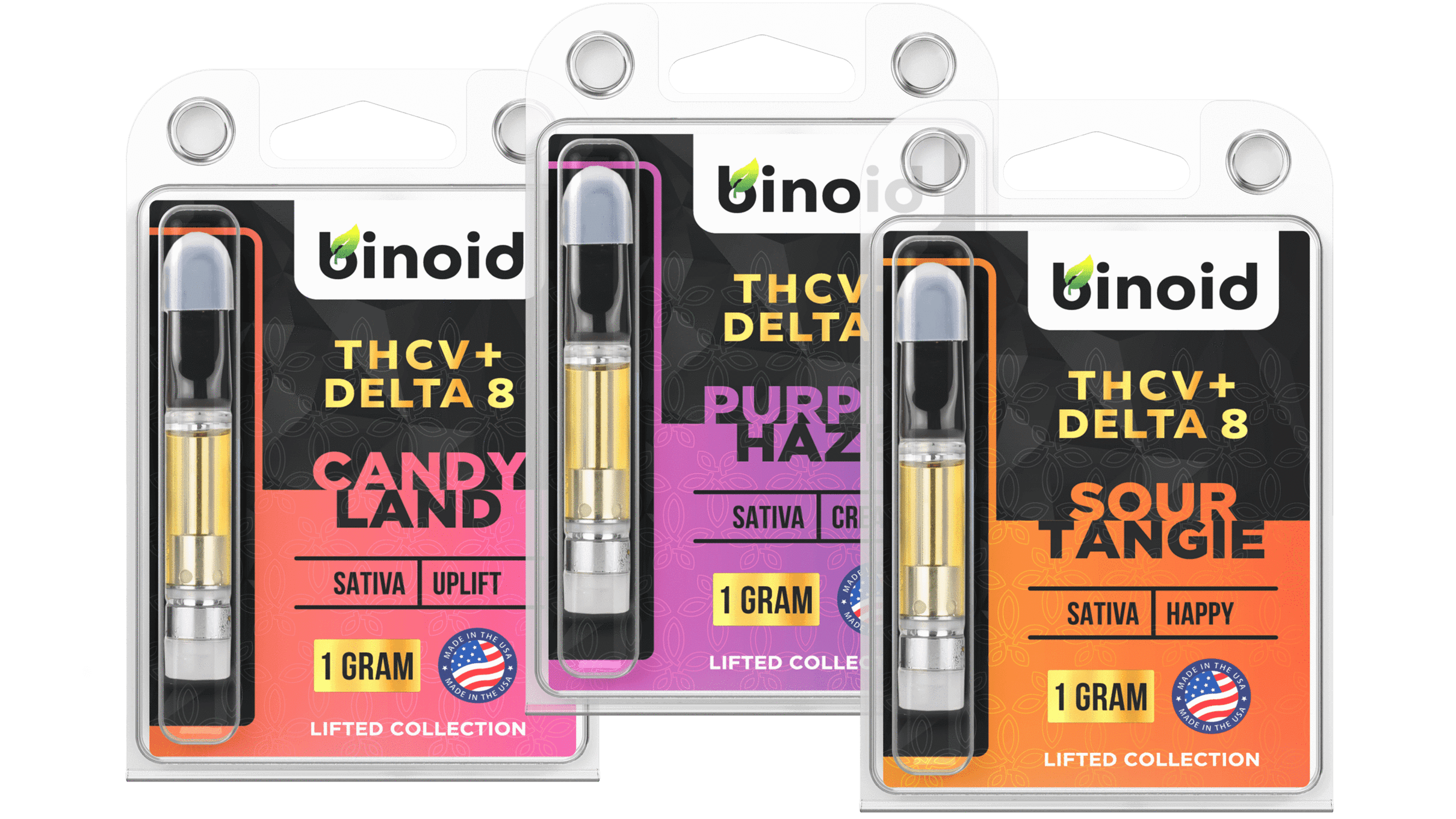 Tetrahydrocannabivarin (THCV), is a very minorly occurring cannabinoid in the hemp plant, acting as a homologue to delta 9 THC but with enough differences molecularly to introduce an entirely new lineup of properties potentially useful to the human system.  Tetrahydrocannabivarin  is a federally protected cannabinoid as well, which is why many companies are launching THCV products so that we can explore these properties for ourselves.

What Does the Research Say in Terms of THCV’s Potential Benefits?

Because tetrahydrocannabivarin is a relatively new introduction to the cannabis sphere, there are not as many studies on its effects as there are pertaining to those of CBD, delta 9, and other popular cannabinoids that we’re more familiar with, and are more naturally abundant in the plant species.

Still, research has been conducted over the years based on samples of THCV taken from hemp which show a lot of promise.  Some of these potential effects have been studied more intensively than others, and we’ve gathered all of the research that exists on the compound to provide a comprehensive list of its potential benefits, to give you an idea as to whether or not it’s worth exploring as part of your routine.

Tetrahydrocannabivarin has been shown to have antioxidant properties, as is the case with many cannabinoids found in the hemp plant.  Naturally derived antioxidants are extremely valuable to the human body, as they play a major role in fighting off free radicals that introduce stress into the cellular system which can lead to premature cell death.  Effectively, antioxidants are capable of slowing down the aging process of the body on a cellular level, which can benefit every single system of the body.  Consuming antioxidants regularly may offer neurological benefits, skin benefits and cardiovascular benefits in particular, as these systems of the body are particularly prone to oxidative stress.

Many cannabinoids are associated with anti-inflammatory activity, which is not surprising considering the role that cannabinoids play in the inflammatory response of the body.  Cannabinoids bind to cannabinoid receptors to regulate, among many other things, inflammation levels both in a localized way, and through balancing of immune functions.  THCV in particular has been shown to have the potential to offer a desirable anti-inflammatory response, both internally and transdermally, which is why it’s being researched as a potential holistic option for those with all kinds of inflammatory conditions, including arthritis.

Research has additionally shown that those who have taken THCV routinely have shown lower inflammation markers, indicating that THCV’s potential anti-inflammatory effects can offer a fairly strong anti-inflammatory response throughout the body.

Tetrahydrocannabivarin has also been shown in studies to offer analgesic properties which could be effective against pain, both localized and widespread depending on the delivery method that’s used.  Analgesics have the ability to desensitize pain receptors belonging to the nerves, with pain tolerance being a function of the nervous system.  CB1 receptors in the body’s nervous system respond well to cannabinoids like THCV, using them to balance the sensitivity of pain receptors in order to potentially reduce pain.  THCV’s effects as an analgesic may be particularly potent according to some researcher, but further studies are needed.

While many of us associate tetrahydrocannabinol (THC) with an increase in appetite, notoriously causing “the munchies”, tetrahydrocannabivarin  may actually suppress appetite.  What’s interesting about cannabinoids and their role in appetite is that they provide an equilibrium-inducing effect that can simply restore appetite to a much more functional level, rather than causing a person to lose the desire to eat to the point of potential unwanted effects.  THCV can bind to cannabinoid receptors in the digestive system that pertain to appetite, helping a person feel full more easily after consuming a meal.  This can be extremely valuable in those seeking out holistic options for weight loss.

THCV might be able to manage fasting insulin levels which can be particularly helpful to those with diabetes.  It seems that tetrahydrocannabivarin in particular works with cannabinoid receptors that play a role in the body’s relationship with sugar, with fasting insulin levels being just one of many potential effects.  Fasting insulin refers to the level of insulin in the blood when a person has not consumed food in several hours, and high levels can be indicative of diabetes or pre-diabetic conditions.  If THCV is capable of balancing this important marker, then it could reduce insulin levels in the body among those whose levels are elevated to the point of making them more susceptible to diabetes.

Another indicator of diabetes is blood glucose levels, which indicates the amount of sugar in the blood.  Hyperglycemia, or high blood glucose levels, is a condition that can indicate diabetes, and can lead to blindness, neuropathy, and kidney failure, among other things.  Again, THCV could possibly lower blood glucose levels by balancing the way in which glucose behaves in the body through regulatory actions inherent in cannabinoids, through binding to cannabinoid receptors in the circulatory system and digestive system.

Tetrahydrocannabivarin may even lower insulin sensitivity for improved insulin response.  This refers to how sensitive the body is to insulin, and low sensitivity to insulin usually indicates insulin resistance, which is a pre-marker for diabetes.  Through its regulatory effects, THCV may regulate the way in which the body reacts to insulin so that it can maintain healthier sensitivity levels, in a way that can potentially prevent the development of diabetes or may even manage diabetes symptoms at the underlying cause.

One property that THCV may share in common with many other cannabinoids is its role in potentially reducing blood pressure levels.  In fact, many casual cannabis users are familiar with this effect, in which potent doses of THC may cause a slightly, temporarily elevated heartrate which is directly caused by reduced blood pressure.  When THCV’s taken over time, it may impact blood pressure in a more maintainable way, which can be extremely useful to those with hypertension who are at risk of heart disease, stroke and other risks associated with the condition.

Tetrahydrocannabivarin, like many cannabinoids in hemp, is being given a lot of attention by medical researchers for its potential role in managing cognitive decline.  As we age, our neurons begin to die off as neural pathways weaken, and this reduces our cognitive skills like memory, decision-making and problem-solving.  Those who experience more rapid cognitive decline may develop dementia, or Alzheimer’s, a severe and terminal form of dementia in which a person may lose their most basic cognitive skills.  Researchers are starting to pay extra attention to THCV as its potential neuroprotective properties may be particularly useful through the way in which this cannabinoid binds to cannabinoid receptors in the cognitive region of the brain.

Due to THCV’s unique affinity to cannabinoid receptors of the neurological system, scientists are also finding that it may offer anticonvulsant properties extremely useful to those with epilepsy and other seizure-inducing circumstances.  Anticonvulsants can reduce the frequency and severity of epileptic episodes by limiting the electrical activity in the brain.

One thing scientists are just starting to explore is the role that tetrahydrocannabivarin might have in mood and mood disorders.  Research shows that this cannabinoid may have antipsychotic properties through its affinity for 5-HT1A receptors in the brain that control the psychotic response.  Additionally, THCV may be useful for those with anxiety, including those with PTSD, by its potential regulatory effects of the amygdala in the brain that deals with the emotional and mental implications of traumatic and otherwise upsetting memories.

Also, many people say that tetrahydrocannabivarin induces feelings of euphoria for them and helps them feel both motivated and creative.  This may indicate that it has a stimulating effect on serotonin receptors in the brain, and depression is a condition which is marked by low serotonin levels.  Therefore, THCV may be studied in the future for its potential role in addressing certain symptoms associated with depressive disorders.

See for Yourself What THCV Can Offer

Tetrahydrocannabivarin is a fascinating cannabinoid that we’re learning more about by the week, but already, it’s clear that it has many properties to offer that make it worth trying.  Of course, if you wish to use THCV in an effort to manage specific symptoms, you should always speak to your doctor beforehand.  With a doctor’s approval, you can find quality THCV products on the market that contain various potency levels of the compound to try out its effects in a controlled but effective manner.  And, as time goes on, we expect to see a lot more THCV on the market in various types of products.